The latest trend in laparoscopic surgery is single port laparoscopic surgery (10,11). Because conventional rigid and straight laparoscopic instruments can cause so-called “chopstick effect”, the single port laparoscopic procedure would become extremely difficult and limited. In order to overcome the problem, Yin et al. proposed an instrument with two rotating wrists (11). The design was to assist the operating surgeons to overcome “chopstick effect”. In their initial attempts in 30 patients, the results were favorable and the results demonstrated the safety and efficacy of the design. Wang et al. also developed a design of steerable laparoscopic instruments using four-cable system as transmission to control the end-effectors (12). The team of DragonFlex leaded by Jelinek et al. published a research article about minimizing the rolling joint in their steerable laparoscopic design (13). Their design improved the size and angle of rolling joint in their product, allowing better manipulation during surgery.

In the study, we proposed a novel design of steerable laparoscopic instrument. We test the efficacy of using the instrument and compared the results to that of conventional instrument design. The study is a usability-based evaluation according to MEDDEV revision 4 under directives 93/42/EEC.

The initial concept is to design an instrument that can exert a full range-of-motion action. During developmental stage of the instrument, there are some limitations in materials and mechanical strength of each structure. The design process was using 3D simulation first and then tested each critical component by making sample components to ensure the strength and function. After repeated tests of the critical components, the required strength and function can be confirmed by the process. The major materials of the hand-held part were made of plastic materials, inclusive of acrylonitrile butadiene styrene and polycarbonate, and the materials providing mechanical strength were made of stainless steel. Both of the materials were safe in terms of biocompatibility and current technology of disinfection by ethylene oxide. The 3D simulation is shown in Figure 1A,B. The product appearance had been optimized for proper handling. The finalized prototype of such instrument is shown in Figure 1C,D.

Figure 1 The image showed the process from conceptual design to real prototype. During design process, 3D modules are created (A). The 3D modulation is used to confirm if required functions can be integrated in such device (B). The prototypes manufactured for subsequent usability evaluation are showed in different articulated angles (C,D).

The basic functions of the steerable laparoscopic instrument included 360-degree rotation of the whole shaft (Figure 2A), articulation of the shaft (Figure 2B) and independent rotation of the end effector (Figure 2C). With all independent functions of the three-axis, the instrument can be used in all directions and can provide more degree-of-freedom during laparoscopic surgery. The mechanical strength of the articulation joint is more than 4 kg during stress test, which is strong enough under most common circumstances. The outer diameter is 4.5 mm, which is compatible with current instrument design and commonly used trocar system. The instrument is insulated in order to connect to an external electrosurgical generator. It can withstand at least 1,200 KV. Before proceeding to the simulation test, the prototype was tested for various scenarios to ensure the strength and safety.

The simulation test is designed based on the requirement of IEC62366 from opening of the package, using the product in common use scenario, worst case scenario, and discarded the product. The scenarios included common use scenario and worse case scenario. The study protocol is shown in Figure 3. The study was performed in the clinical skill center in Tamsheui branch of Mackay Memorial Hospital. The study room is an isolated room with an observable double mirror. The personnel can stand in front of the double mirror to observe, to record and to instruct the tested steps. We used a simulation box to allow surgeons to test for the specific task in each step. The tested procedure included moving a plastic tube in straight line, to throw a knot, to suture in a certain site, to place a string in a certain sequence, to cut a specimen, and to open a candy enclosed in a foil. Performing the procedures was tested by using conventional rigid instrument (Figure 4A), by using steerable laparoscopic instrument (Figure 4B) and by using a predicate device in the test (Figure 4C). The time required for the action and relative difficulty would be recorded and analyzed. The difficulty score of performing a certain procedure ranged from 1 to 5 and the scores were defined in Table 1. The score of difficulty using conventional rigid instrument to accomplish a certain task was defined to be 3 (Table 2). SPSS 13.0 was used to test the difference between each the results of using different instruments by the participated surgeons.

Figure 3 The protocol of the usability evaluation. The protocol covered from opening of the package, using the product, testing in various scenarios, to any foreseeable misuse and any resultant problem. 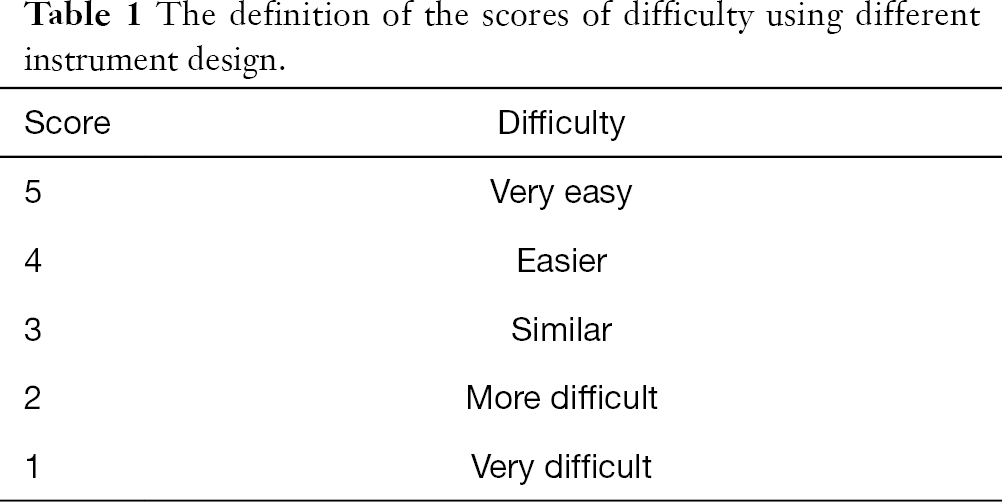 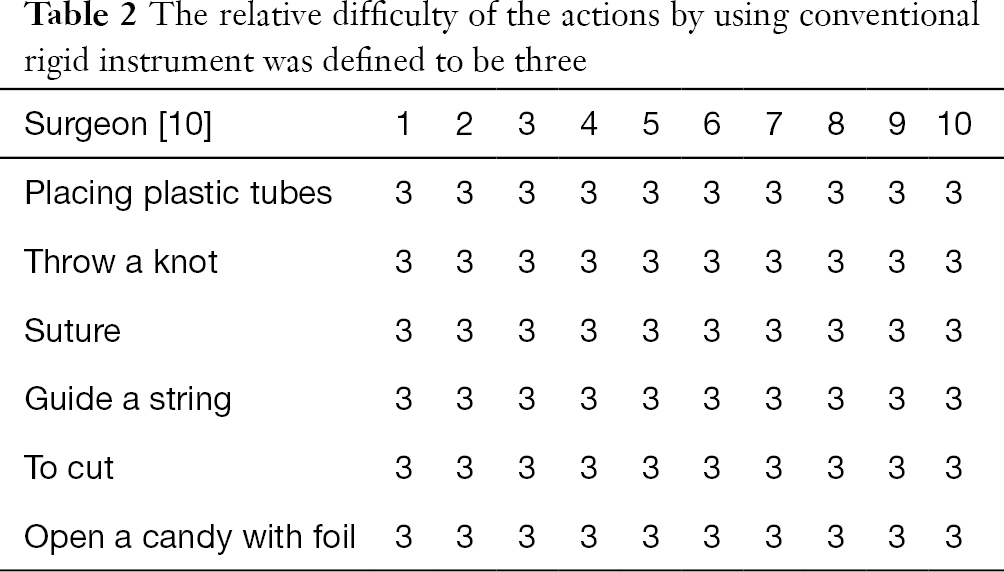 There were ten surgeons involving the usability-based simulation test. The background of the surgeons is showed in Table 3. During the instruction step, the average time required for the surgeons to learn of the operation of steerable laparoscopic instrument and the predicate device, Covidien SILS Clincher, were 3.8 and 4 minutes, respectively. There was no significant difference. All of them can understand the operating principle without reading instruction manual within 5 minutes. All surgeons were quite familiar to conventional rigid instrument and actually there is no time required for them to understand the operating principle. None of the test instruments are broken by wrong manipulation. Therefore, in the worst case scenario, there is no issue of safety concern. 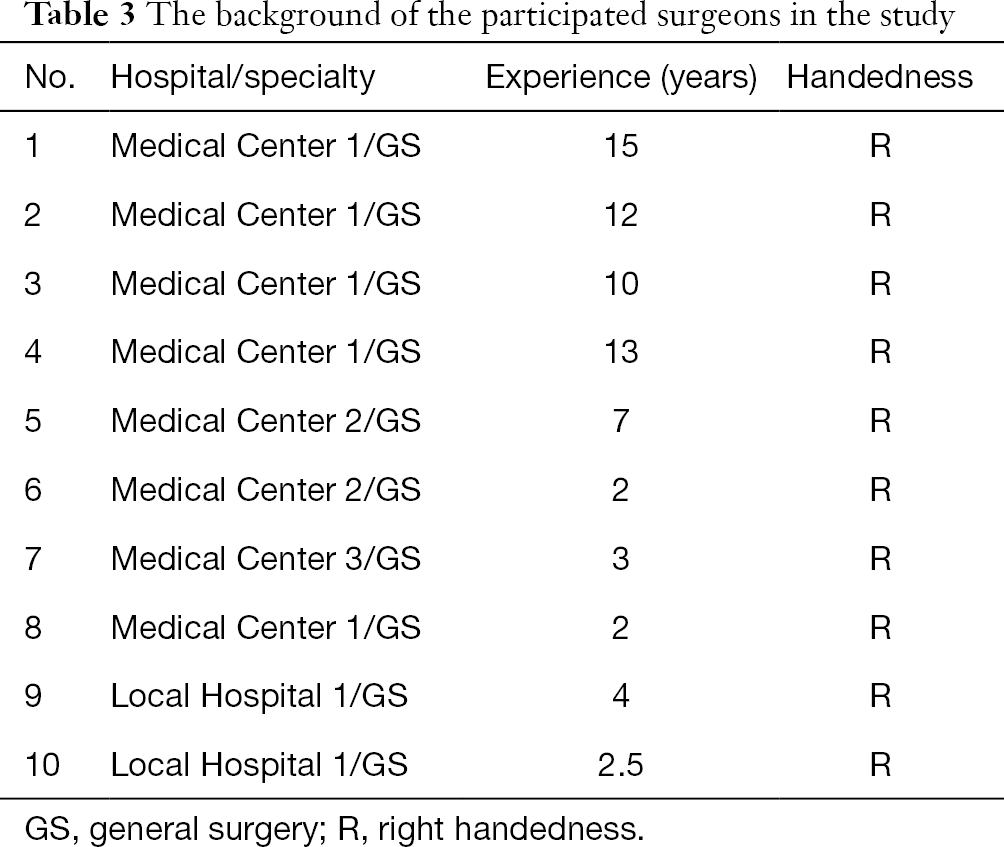 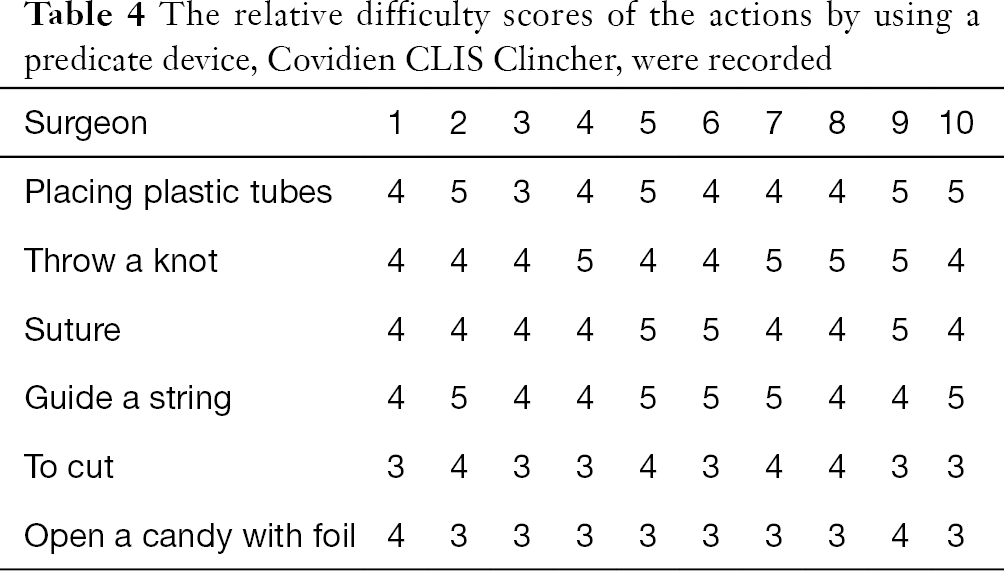 Table 4 The relative difficulty scores of the actions by using a predicate device, Covidien CLIS Clincher, were recorded
Full table 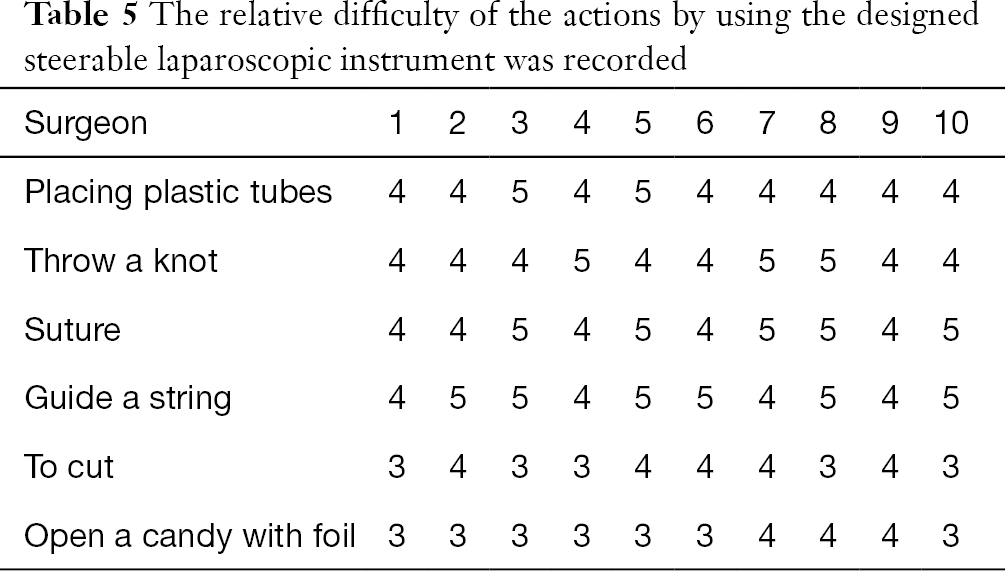 In the history and development of laparoscopic surgery, evolution of surgical instrument plays a great role. In the early days of laparoscopic surgery, surgeons could use some primitive tools or methods to perform laparoscopic surgery. In early days, they were usually simple and uncomplicated procedures (14). Because initial attempts of laparoscopic surgery resulted in promising outcome, more and more demands in instrument emerged (15-17). Delicate and accurate procedure can’t be done without innovative and proper instrument designed for such purpose. The latest trend in laparoscopic surgery can be categorized into two concepts. One concept is to use similar number of port incisions but the incision size is minimized. For example, surgeons can use three 3 mm incisions and one 10 mm camera port instead of four 10mm port incisions to do the same procedures. The main difference is using fine instrument, usually 3 mm in diameter. Instrument of small bore has its own limit in mechanical strength and is usually more suitable in pediatric patients (18). In adult, the application potential of such instrument is quite limited. Another concept is to utilize a single incision, usually umbilical incision, to perform surgical procedures that were previously performed by multiple port incisions. The method is termed as single incision endoscopic surgery (SIES) (19-21). Other terms, such as uni-portal laparoscopy and single port laparoscopy, were indicative of the same concept (22,23). Both concepts have their own advocates.

While performing surgery in either so-called reduced port surgery or SIES, instrument design would influence feasibility and risks of a certain surgical procedure. In the past, some surgeons tried to use conventional rigid laparoscopic instrument to perform SIES. The mode of using instrument in SIES is feasible but usually results in “chop-stick” effect (11,24-26). When the operative space in the abdominal wall created by the incision is small, the middle part of the instrument would be confined in the incision. The hand-held part will interfere with each other and cause difficulty in manipulation of these instruments during a certain procedure. In order to minimize such problem in SIES, there are some potential solutions. The first and simplest solution is to use instruments of different length to minimize interference in the hand-held parts. A demerit of using different length instrument is that there would be some interferences in front effectors (25). A second concept is to use curved instrument to avoid chopstick effects (13). However, curved rigid instrument is not compatible with conventional access device (27-29). Conventional access device is a trocar with long rigid lumen made of plastic materials. When the curve of an instrument is large, it can’t be placed into peritoneal cavity through the access device. A third method is to use instrument that can change direction after entering into peritoneal cavity. Such instrument is termed as articulated instrument or steerable instrument, in a more advanced version. The design of steerable instrument has some advantages. When the instrument is kept in straight line, it could be used as a conventional instrument. When surgeons place the instrument into body cavity, it can be placed through conventional rigid trocar. The shaft can be articulated after the instrument shaft being in the peritoneal cavity. Because selection of certain port incision sites may limit the direction of approach angle of rigid laparoscopic instrument, steerable laparoscopic instrument can provide more degree of freedom during operation.

In our study, we can see that in performing certain tasks by different instrument designs, feasibility of steerable instruments is always better than that of conventional rigid instrument. The only demerit is that users have to learn to use the instrument. Being familiar to certain design may require time and patience for participating surgeons.

The initial simulation study demonstrated that using steerable laparoscopic instrument might be beneficial in performing laparoscopic surgery, especially in SIES. The true benefits and efficacy should be evaluated in an adequate study involving real surgical procedures in the future.

Funding: The authors would like to thank the National Taipei University of Technology and Mackay Memorial Hospital, Taiwan for financially supporting this research under Contract No. 108DMH0100070.