Small bowel volvulus (SBV) is one of the most serious abdominal emergencies. SBV is most often secondary to postoperative adhesion, fibrous bands involving the mesentery, or congenital small bowel malrotation. We present a previously healthy female visiting emergency department because of lower abdominal pain, and her computed tomography (CT) revealed a whirl sign, a sunshine-like picture and ischemic small bowel changes caused by SBV due to a band between uterus and mesentery. She recovered well after emergent operation.

A 38-year-old healthy female presented to the emergency department complaining of acute onset of lower abdominal pain with persistent vomiting since 6 hours ago. The patient appeared to be in distress, but her vital sign was normal on arrival. Upon physical examination, her lower abdomen was mild tender without guarding, and was heard of normal active bowel sounds. The supine abdominal radiograph was unremarkable except stool impaction in the course of descending colon (Figure 1). Because of progressive lower abdominal pain even after medication, we arranged whole abdominal CT with/without contrast. In axial view, it showed whirl sign of the vascular shadow in the lower abdomen (Figure 2, arrow). In coronal view, it showed the small bowel loops with the mesentery centralized to the center of a circle just like a sunshine picture (Figure 3, arrow). In addition, it revealed dilatation and edema of the small bowel loops with poor enhancement and the mesentery surrounding by fat turbidity. The overall findings might indicate an SBV which leaded to vascular insufficiency and resultant ischemia. This conclusion was confirmed by an emergent abdominal operation. The intraoperative findings show SBV caused by a band between uterus and mesentery causing overriding on a loop of terminal ileum with strangulation, and about 100 cm ischemic small bowel; the surgeons performed band excision and bowel resection with anastomosis smoothly. Fortunately, she subsequently recovered well nine days after the operation. 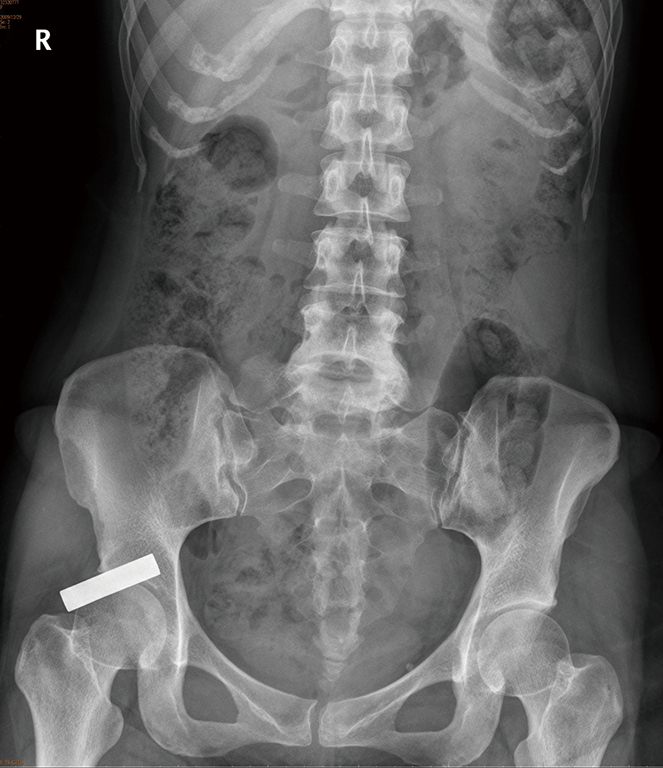 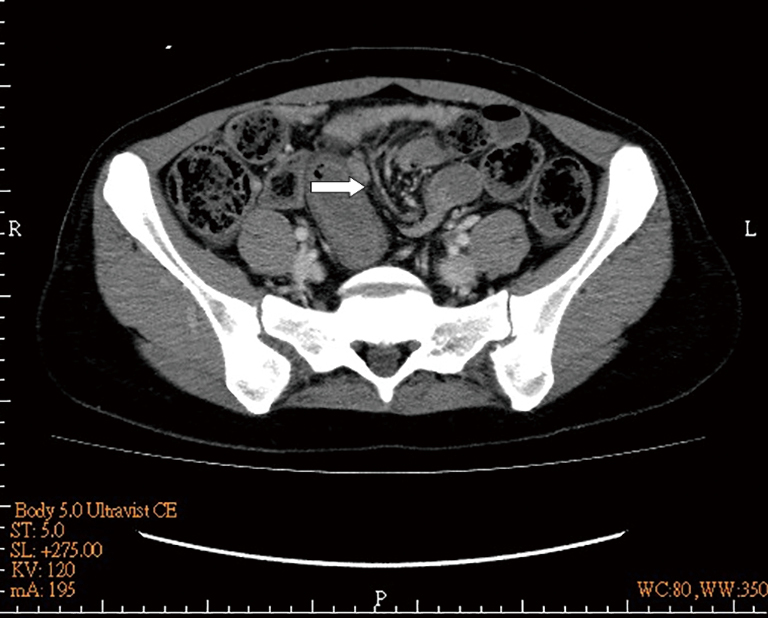 Figure 2 Axial view of contrast CT of abdomen showed a whirl sign (arrow) of the vascular shadow in the lower abdomen. 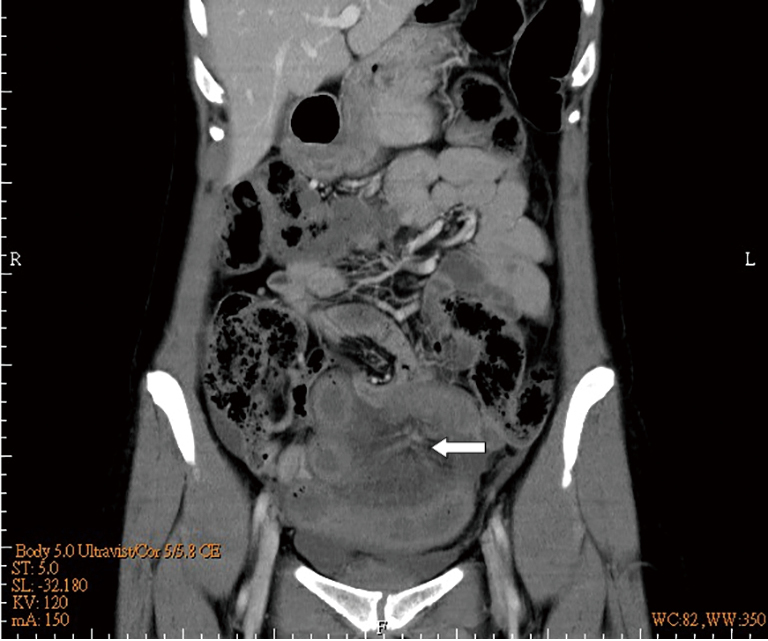 SBV, a special form of mechanical intestinal obstruction, is torsion of a loop of small intestine around the axis of mesentery that supports it (1). Based on its cause, SBV is classified into two types, primary and secondary (2). Primary volvulus occurs when patient has no underlying anatomic defects nor known predisposing causes (3). Secondary type of volvulus is defined when patient has a congenital or acquired abnormality such as postoperative adhesion, fibrous bands involving the mesentery, and anatomic malformation and malrotation (4). SBV accounts for 20–35% of small bowel obstructions in Asia, Africa, and the Middle East, however, it is rare in western countries, where the incidence is reported to be 1–6% (1,5).

Abdominal pain, distention and vomiting are often reported as symptoms of SBV, nevertheless, they are nonspecific and similar to other causes of small bowel obstruction (1,6). Besides, abdominal radiography and laboratory data also yield nonspecific result that may not use to demonstrate the causes (6,7). Since no diagnostic clinical signs or abnormalities in the laboratory or radiologic images could clearly any specific finding in most patients with SBV, CT scans were relied to achieve discovery of the underlying pathology (7,8).

Even though several reports propose the appearance of “whirl sign” on CT is in association of intestine volvulus, the importance of the sign had been questioned (10,11). Some investigators suggest that it is a nonspecific sign and it is not proved evidently to indicate any pathological process. The author of a study with six cases all show a CT whirl sign states that the sign is nonspecific because only two patients are surgically diagnosed volvulus (11). In another study with a large number of oncologic patients, the investigators conclude and state that “whirl sign” can be detected on CT in most patient suffering from SBV, however, most whirl signs detected on CT will not predict the presence of SBV (10).

Clinical clues including symptoms and laboratory data are often nonspecific in confirming the diagnosis of SBV (3). Even though the sensitivity and specificity of the whirl sign in the diagnosis of SBV are variable and controversial, CT remain a useful tool to detect possible clues of underlying causes (1,7). In this case, we find the patient’s CT revealed a whirl sign of the vascular pattern and a sunshine-like picture that bowel loops and mesentery rotate around a fixed center point of a circle; in addition, it revealed dilatation and edema of the small bowel loops with poor enhancement and the mesentery surrounding by fat turbidity. We suppose combine these CT findings and clinical presentations of progressively abdominal pain might increase the possibility to diagnosis of SBV.

SBV is a life-threatening emergency and the final diagnosis of SBV is confirmed at surgery. SBV causes mechanical obstruction, vascular compromise, or both. It can lead to bowel ischemia and ultimately gangrene necrosis. Emergent surgery is indicated when non-operative treatment failed to achieve relief of symptoms or when clinical or radiography finding presented evidence of ischemic bowel or impending bowel necrosis. Surgical intervention should be performed as early as possible to treat and diagnose SBV and prevent adverse outcomes and complications (3,12).