The ED length of stay in gunshot injuries: experience in a metropolitan medical center

Gunshot injuries are usually caused by suicide attempts, fights and robberies (1-3). The mechanism of gunshot injury is complex and depends on a number of factors, such as the type and velocity of the projectile and the firing distance (4-6). Although the wounds may not always be severe bleeding or lacerating, the ballistic trajectory could cause severe burns or chemical damages to vessels, musculoskeletal or other major organs. It may require an aggressive intervention to stop the bleeding. The high mortality rate is accompanied by complications such as sepsis.

According to prohibitive gun licensing laws, the citizens in Taiwan have been restricted from holding firearms. As a result, gun crime in Taiwan is still uncommon, and there are fewer cases of gunshot wounds (GSW) compared to other countries where people can legally possess weapons such as the United States (1,7). Mackay Memorial Hospital is located at Taipei City, surrounded by nightclubs and red-light districts. Due to this unique location, our hospital becomes the first-line medical center managing gunshot victims in northern Taipei. Few research articles have been published regarding this unique situation in Taiwan (8-10). We are motivated to analyze the characteristics and the emergency department (ED) length of stay (LOS) of GSW patients in the trauma center.

This retrospective study was conducted in the ED of Mackay Memorial Hospital. Mackay Memorial Hospital is a trauma center located in northern Taipei, Taiwan with 2,000 admission beds and an ED annual census of approximately 120,000. The institutional review board approved the study. All consecutive patients 18 years or older who presented to our ED with gunshot injuries from January 2012 to December 2017 were retrospectively enrolled.

After enrollment, the medical charts and of the enrolled patients were examined for epidemiological data, types of guns, causes of injuries (suicide or assaults), and the survival rate, etc. In addition, we also reviewed the patients’ records for the following analyses: (I) wound position and the correlated clinical presentations; (II) the ED LOS of patients receiving emergency surgery for major organ or vascular injuries. This measurement is the interval between time of ED arrival and time of ED departure to the operation room (OR); (III) LOS in intensive care unit (ICU) and acute physiology and chronic health evaluation (APACHE) score.

Descriptive results were reported as mean ± SD when appropriate. Fisher exact test was applied for categorical data in the injury and outcome analysis. Mann-Whitney U test was used for numerical data in the ED LOS analysis. All statistical analyses were completed with SPSS 19.0 version software SPSS (Armonk, NY, USA). Differences were considered to be statistically significant when two-tailed P<0.05.

A total of 27 cases of GSW were collected. A proportion of 74.1% of patients were young age between 20 and 44 years old. The incidence rate was relatively lower (3.7%) in the elder people older than 65 years old. There was only one female patient, and the remaining 26 patients were male. Most of the injuries (81.5%) were intentional attacks and 88.9% of these victims were assaulted by pistols (Table 1). 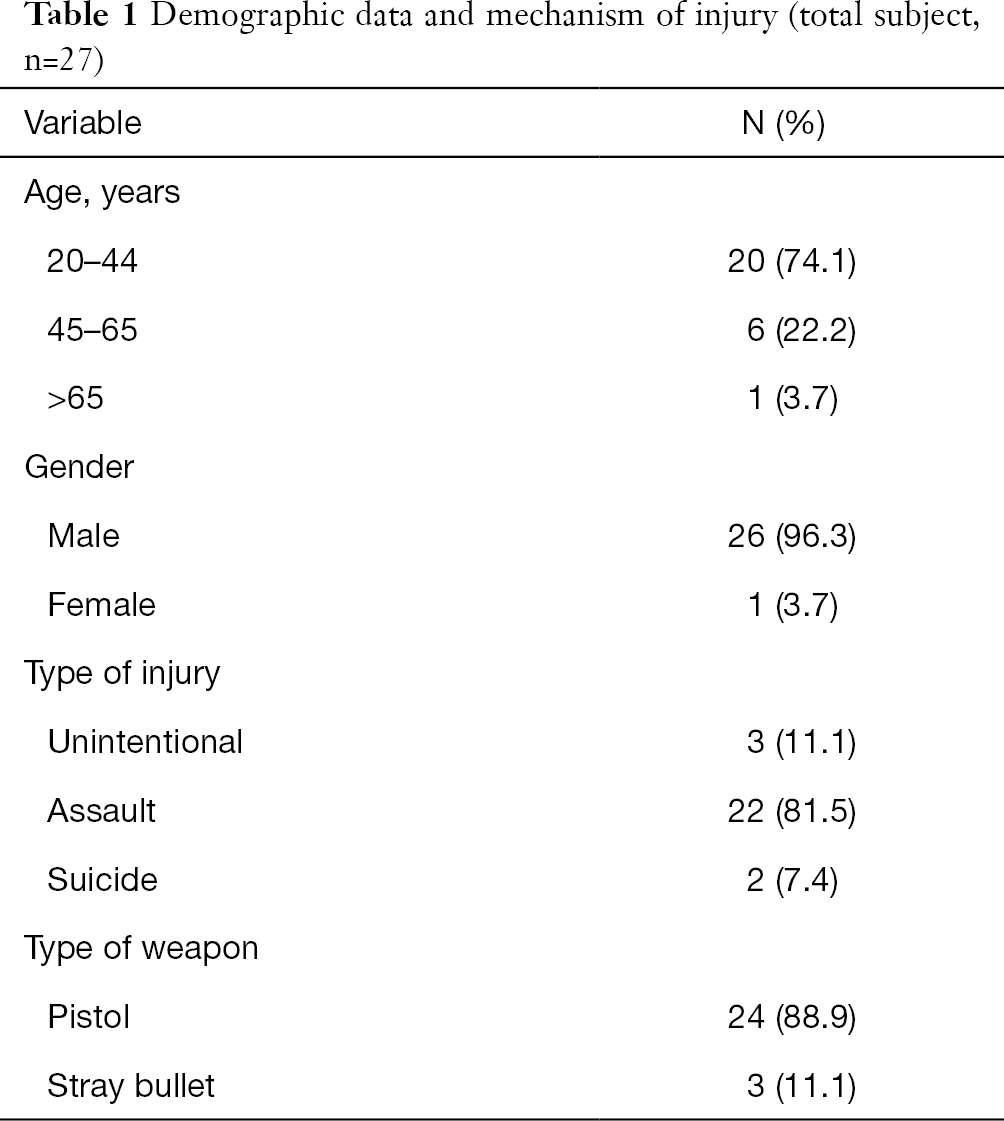 In Table 2, we found the most common injured site was in the extremities (55.6%). Among these 27 patients, 14 patients were with Injury Severity Score (ISS) less than 9 scores, 5 patients between 9 to 15 scores and 8 patients more than 15 scores. Except the 4 out-of-hospital cardiac arrest (OHCA) patients, all the other 23 patients were prescribed antibiotics, including 17 with intravenous form and 6 with oral form. There was no sepsis occurred in these patients during hospitalization. However, 1 patient revisited our hospital 12 days later for intra-abdomen abscess formation. 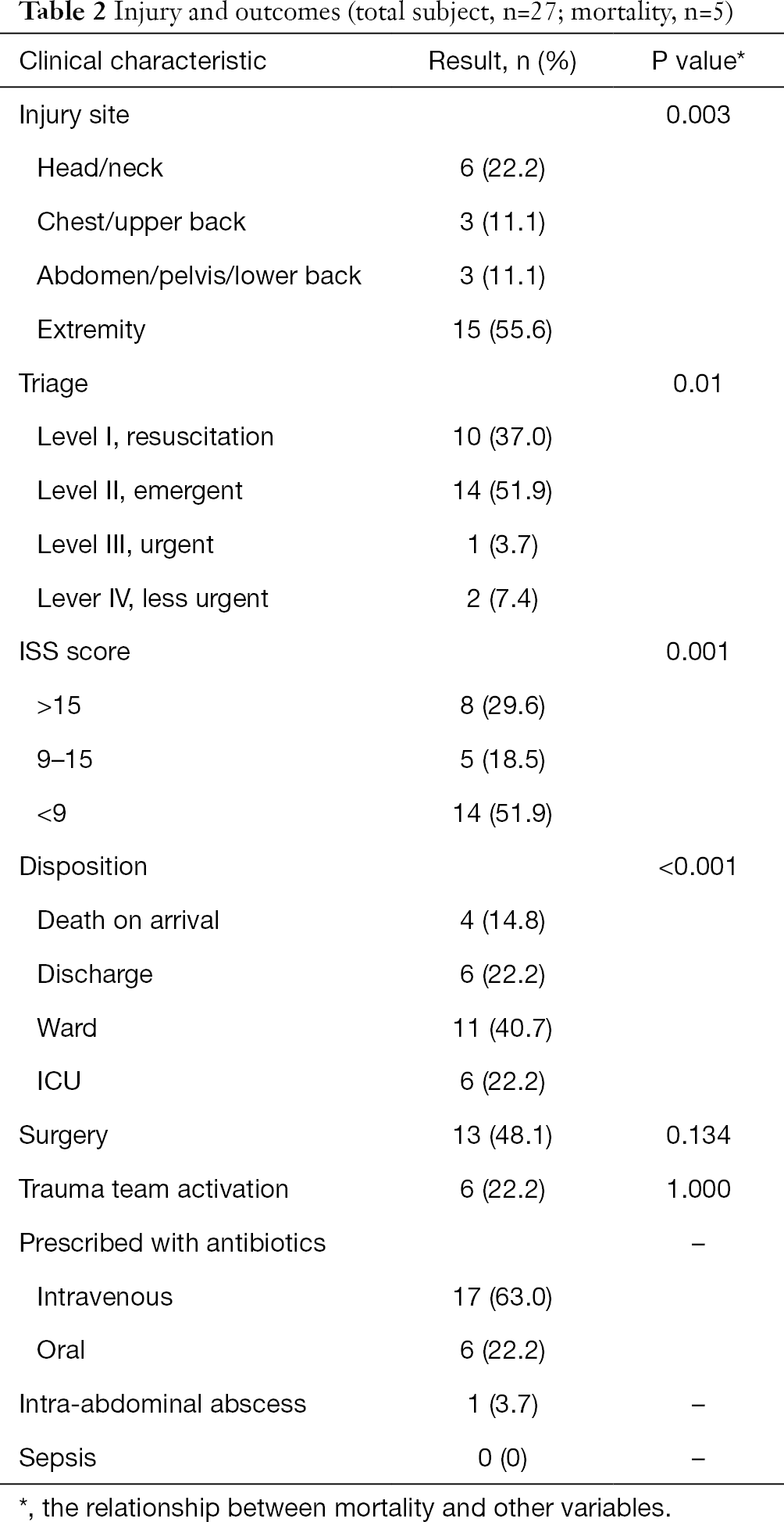 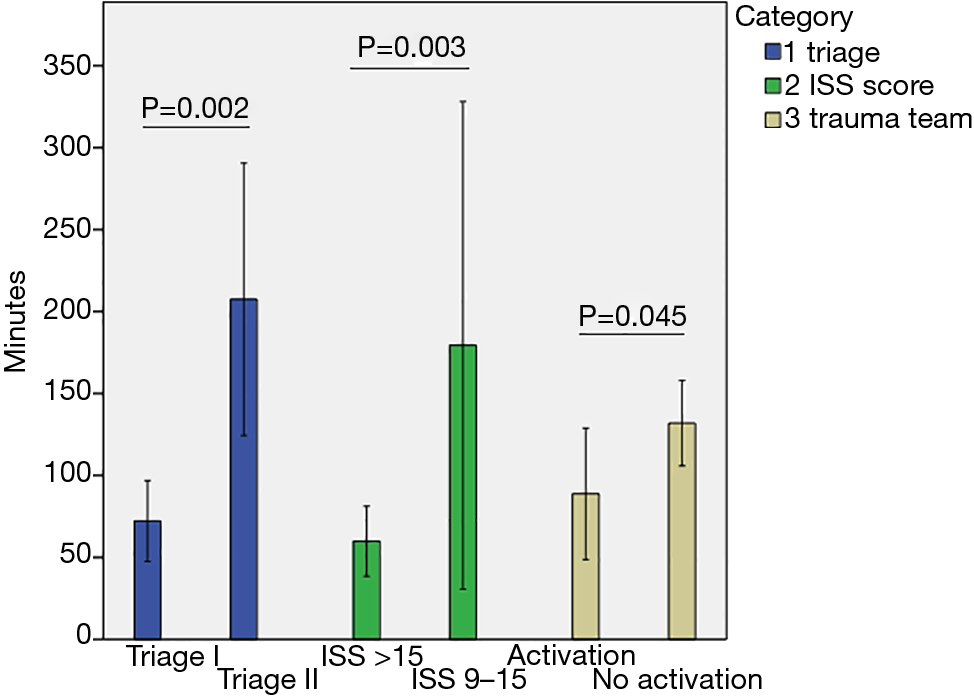 Figure 1 The comparison of emergency department stay time for gunshot patients (triage I vs. triage II; ISS >15 vs. ISS 9–15; trauma team activation vs. no activation).

As for disposition, 4 OHCA patients had futile resuscitation, including 2 patients shot in the head and 2 patients with multiple gunshot wounds, and 6 patients were not hospitalized due to superficial and minor injuries. The average time of hospital stay of the remaining 17 patients, including 11 in general ward and 6 in ICU, was 9.1±6.9 days. Only one patient passed away in the ICU for severe head injury and all other 16 patients survived. Among the 6 ICU patients, their average duration of ICU stay was 6.2±3.5 days and the average APACHE score was 7.6±4.2. A patient shot in the head had the longest hospital stay of 28 days (Table 2).

Our results were in line with others that males (96.3%) were injured by guns more often than females (3.7%) in all age groups (2,11-13). The majority of our GSW injuries were also in younger males (74.1%) (1,11,12). Only 1 male was older than 65 years of age. In addition, our hospital is located in an area with dense civilian population, where low-velocity wounds caused by handguns with projectiles’ muzzle velocity of less than 600 meter per second (m/s) are more common (4). The majority (88.9%) of our cases were injured by pistols, respectively. In addition, most of our patients were victims of assault (81.5%) and only 2 patients were with suicide attempts. The prevalence of our suicidal gunshot injuries (7.4%) was relatively lower than other countries (1,3). Although suicidal gunshot injuries have been clearly associated with poor outcome (5,13-15), one of our patient shot himself and the bullet only got stuck at his temporal subcutaneous region without penetrating into the skull. This might be because guns are not easily obtained by our civilians. They may be unfamiliar with the way of shooting or use the handmade pistols.

In the literature, it has been pointed out that the mortality rate of GSW in the brain is related to GCS (8,14-16). In our study, there were only 6 patients with GSW in the head. Among them, 4 cases (66.7%) were dead, including 3 cases of OHCA and 1 case of in-hospital cardiac arrest (IHCA). The mortality rate was similar to 51–84% reported by previous studies (8,15,16). The GCS of the case of IHCA was E1M2V1 with dilated pupils on both sides and without light reflex while sent to the ED. This patient did not receive surgical treatment and expired at the ICU 4 days after admission. We found that if the ballistic damage patients have a GCS of less than 4, the mortality rate is 100% in our subjects. The mortality of injury in the head is significantly higher than other organs.

We further analyzed the ED LOS in different groups of triage level and ISS score. The study results suggest that the important factor affecting ED LOS during such an incident is waiting for operation once a disposition decision has been made. The reasons for the increasing output time interval might be due to an inadequate number of surgeon and operating rooms for emergent trauma patients. For the 13 surgical patients, 5 triage level I cases whose ISS scores were between 9 to 25 were treated by an activated trauma team, and their ED LOS could be diminished to the shortest. From a time-effectiveness perspective, our study identified that a trauma team response might initially improve the quality of patient care in severe GSW injuries by shortening the time from arrival in the ED to assessment and management (17,18). Consistent with growing evidence, patients treated by trauma teams have been shown to have shorter ED stay time, ED to computed tomographic imaging time and ED to OR time (19-21), which can further save lives and prevent long-term disability (19,22,23).

We acknowledge that there are some limitations in our study. Owing to the retrospective design with its inherent selection bias lacks the data on the circumstances of the mechanisms of injury and the appearance of wounds. On the other hand, the small sample size conducted at a single urban trauma center in northern Taiwan, which may not be representative of other populations. In addition, there might be unmeasured confounders, such as time interval of waiting for ED registration, and man-made factors of time records. However, the authors did make every attempt to collect all data from a computer database and medical records. All enrolled patients had precise data for each variable, with no missing data.

TTA in severe GSW patients indeed shorten the ED LOS and might initially improve the quality of patient care. This is the result of better trauma systems, including advances in care from emergency medical services and the acute care surgical management.

Ethical Statement: This study was approved by the MacKay Memorial Hospital Institutional Review Board (No. 18MMHIS045e).