Bezoars are defined as indigestible foreign materials impacting in the gastrointestinal tract, which are classified according to what they are composed of. Small intestinal obstruction caused by bezoar impaction was a rare disease. However, it has become more and more recognized since gastrectomy with truncal vagotomy was introduced into the treatment of peptic ulcer disease. This is a typical case with a medical history of radical subtotal gastrectomy with Billroth II reconstruction and truncal vagotomy for gastric adenocarcinoma about one year ago, and symptoms of intestine obstruction occurred. It reminds us that sonography is still a practical tool in screening small intestine obstruction due to bezoar impaction.

An 83-year-old man presented to our emergency department (ED) due to right abdominal intermittent cramping pain for several days. He had a past history of radical subtotal gastrectomy with Billroth II reconstruction and truncal vagotomy for gastric adenocarcinoma about one year ago. There was anorexia and nausea sensation after meal. The amount of stool passage decreased gradually. Physical examination revealed mild tenderness over the right upper and middle abdomen, but without rebounding pain or muscle guarding. The bowel sound was hyperperistalsis. Laboratory data only showed mild leukocytosis (white blood cell count: 11,200/cumm, segmented neutrophil: 71.7%, lymphocyte: 23.2%, monocyte: 3.8%) and slightly elevated C-reactive protein (5.6 mg/dL). Sonography of abdomen was performed with Toshiba SSA-340A ECOOCEE Ultrasound System and a 3.75-MHz Convex transducer (Toshiba PVE-375M). An intraluminal hyperechoic arclike mass with posterior acoustic shadow within a segment of dilated bowel loop was revealed. Adjacent bowel wall thickening just proximal to the obstruction level was also noted (Figure 1). An abdominal computerized tomography (“CT”) for the patient demonstrated a well-defined oval intraluminal mottled mass of mixed gas and soft tissue densities impacted within a dilated loop of the ileum with bowel wall thickening proximal to the level of bezoar. It caused collapse of the distal small bowel, and dilatation of small bowel proximal to the bezoar (Figure 2). Partial intestine obstruction due to bezoar impaction was diagnosed. After discussion with the surgeon, an operation was seemed to be unavoidable, if condition went worse. Yet, conservative treatment with close observation was still tried first by gradual hydration via intravenous injection and restriction of food intake. The patient kept nothing by mouth [Nil Per Os (NPO)], and peripheral parenteral nutrition (PPN) supplement was administered. He recovered gradually and low residual diet was tried. He tolerated well. There was no more abdominal discomfort or obstruction signs. Thus, the plan of operation was cancelled. Finally, he was discharged one week after admission due to stable condition. 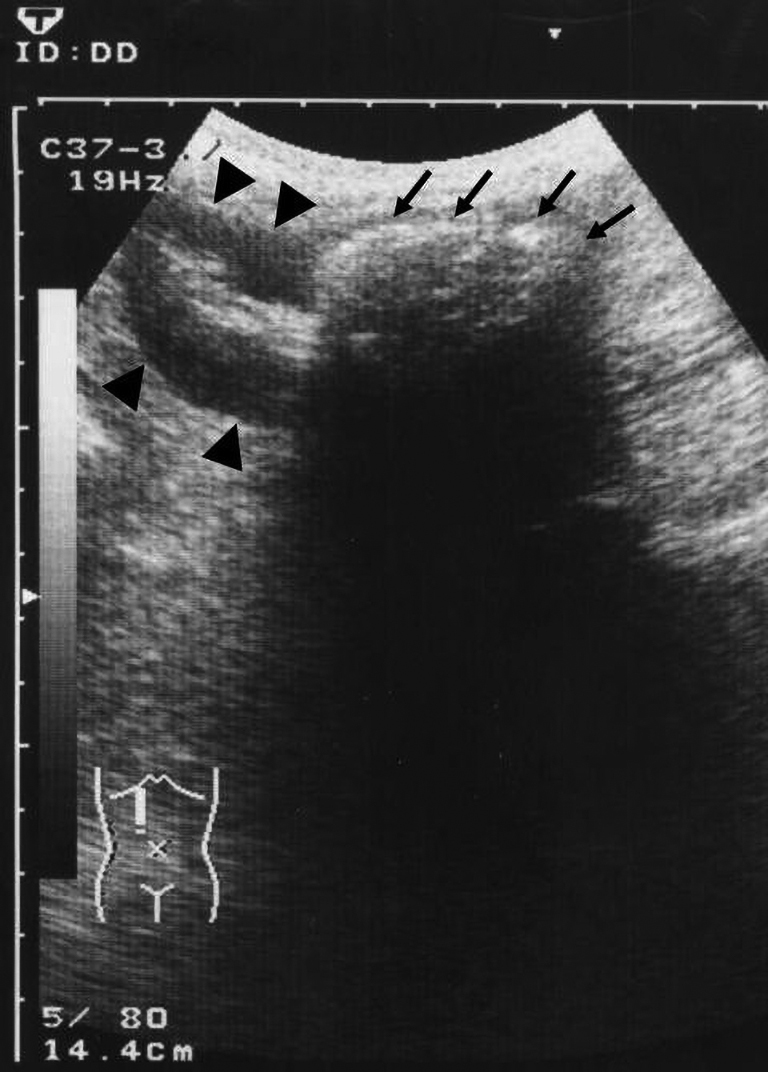 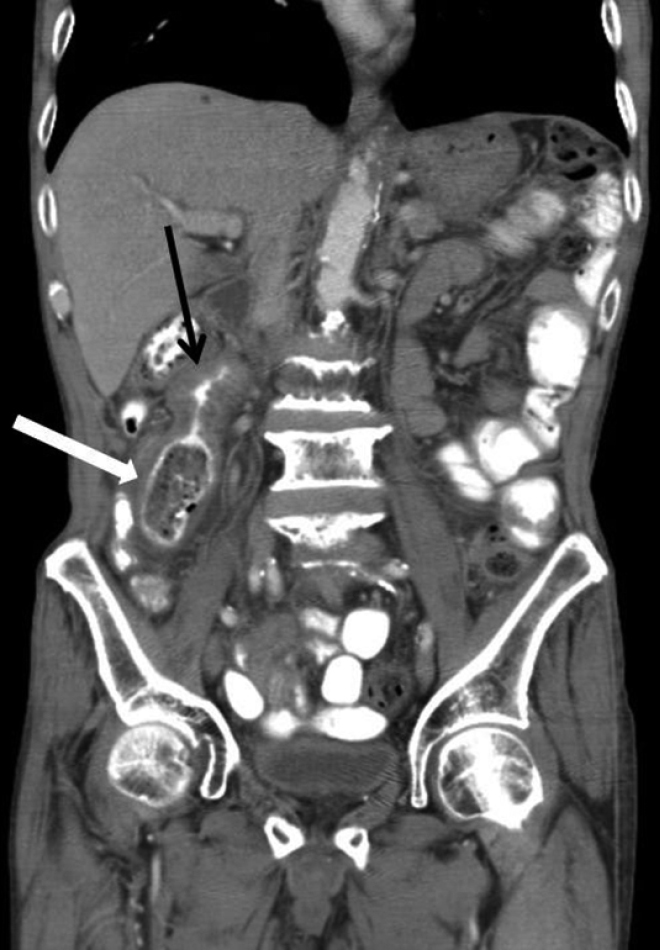 Bezoar impaction is a rare cause of obstruction of normal bowel lumen. Bezoars are defined as indigestible foreign materials, impacting in the gastrointestinal tract, which are classified according to what they are composed of. Trichobezoars and phytobezoars are the most frequent forms (2). They are respectively composed of hairs or vegetable and fruit ﬁbers. History taking is very important in the diagnosis of bezoar-induced intestinal obstruction. Eighty percent of trichobezoars occur in people under age of 30 years, and more than 90% of them are females (3). Trichobezoars are associated with mental retardation, pica, and trichotillomania. On the other hand, about 75% of patients with phytobezoar have a past history of subtotal gastrectomy or gastrojejunostomy (4). A history of excessive intake of vegetable fibers was revealed in about 40% cases of phytobezoar (5). The common symptoms of bezoar-induced intestinal obstruction are early satiety, body weight loss, abdominal pain, nausea and vomiting (6). It could be mild or severe. Sometimes, a palpable mass may be noted. CT is still the imaging modality of choice in preoperative diagnosis of small bowel obstruction caused by bezoars. Although ultrasound has less sensitivity and specificity in detecting bezoars as compared with CT. It still can reveal bezoars in 88% of patients (4). In addition, ultrasound may be a more available and time saving tool when used as a “screening” modality at ED for patients with mild persistent nonspecific abdominal pain but without definite peritoneal signs, especially when presence of past history of gastrectomy with truncal vagotomy. Schmutz et al. reported that sonography had a specificity of 82.1% and sensitivity of 95% in detecting small bowel obstruction. It appears accurate in confirming a small bowel obstruction and in determining the etiology of small bowel obstruction. During the sonography, hyperperistaltic fluid-filled loops with diameter greater than 25 mm in the jejunum, greater than 15 mm in the ileum, and collapsed colonic lumen suggest of small bowel obstruction. In contradistinction, distended small bowel loops with abundant gas, hypoperistaltic motion and a colonic lumen filled with gas, fluid or stool suggest of paralytic ileus (7,8).

Intussusceptions and primary small bowel carcinomas may be characterized as “target” or “bull’s eye” lesion in sonographic patterns (8). Pneumobilia and direct visualisation of ectopic stone are the more specific finding of gallstone ileus (9). Ultrasound images of bezoar impacted in small bowel may show a long intraluminal, hyperechogenic mass with intense posterior acoustic shadowing. The lumen in front of the impacted bezoar may be dilated with accumulated fluid. Sometimes, a segment of proximal bowel wall swelling may be found. The sonographic appearance of this case presented the same pictures.

Some case reports have addressed the role of sonographic detection of small intestinal phytobezoar (10-12). Sonography may be appropriate for pregnant patients or as a bedside real-time tool for the critically ill patients at ED, although it’s not as helpful as CT for the diagnosis of location, cause, and possible strangulation of small intestinal obstruction. Evaluation of intestines should be included in the ultrasound training program of emergency medicine curriculum.