Using intelligent, interactive LED lighting systems in the development of medical care for the elderly

Age-related vision loss is caused by a loss of elasticity in the crystalline lens of the eye creating a surface that is no longer smooth (1). Age-related vision loss can make it hard for the elderly to see colors and adapt to changes in light (2). This vision impairment can negatively affect their lifestyles (3).

The MMH Emergency Department is a free-standing emergency medical care facility operating twenty-four hours a day. There is a rescue area, intensive care unit and observation ward. Lighting in the emergency room is important and the hospital must be well lit during all hours of operation. The bright light can result in vision impaired patients falling, complaints that the lights are too bright to sleep (4), and an increased energy cost from running the air conditioning to counter the extra heat from the continuous light. The MMH Emergency Department needs brighter lighting like the Obstetrics and Gynecology Departments have. However, these departments lighting equipments are also requested turning into softly lit walkways, while especially in the night, to prevent causing insomnia in the patients. This keeps their eyes from being directly exposed to the light too much. In order to keep glare and reflections off computer screens and avoid causing the dazzling, or eye-blind, effect when the staff look up from their screens, the emergency care and service stations should be brightly and clearly lit (5,6).

Manipulating light to reduce falls and accidents among the elderly has garnered much attention in the medical community (7-9). Elderly patients would feel more comfortable under proper lighting and would be able to read inside without eye fatigue (10). The change could also aid in their recovery and improve their satisfaction with their care (11). The purpose of this research is to reduce the number of falls and accidents among the elderly by improving the lighting in their care facilities, such as emergency rooms, hospitals and nursing facilities.

A questionnaire was administered to understand how the elderly felt about and experienced the lighting. Patients were divided into an experimental group and a control group (Figures 1,2,3) and exposed to different levels of brightness and light intensity. In the experimental group, adjustable light-emitting diode (LED) lights were installed for patients in the Mackay Memorial Hospital Emergency Room, but traditional lights were installed in the control group. The subjects had been collected in those equipped room between 1/1/2010 and 12/30/2010. The questionnaire focused on the Ergonomic Lighting Indicator (12), which evaluates the following characteristics of lighting: (I) the object discrimination effect, which involves the contrast levels between objects; (II) depth of field, which is the distance between the nearest and farthest objects that appear acceptably sharp in a scene; (III) lighting comfort, which is mainly used to avoid glare; (IV) dynamic visual acuity, which involves the perception of a moving object with low shadow; and (V) lighting management, in which a lighting control switch is provided to help users adjust their lighting according to their needs (Figure 4). Energy conservation was also studied by measuring the disparity with kilowatt-hour meter between energy-saving LED lamps and traditional lamps with adjustable lighting capabilities. 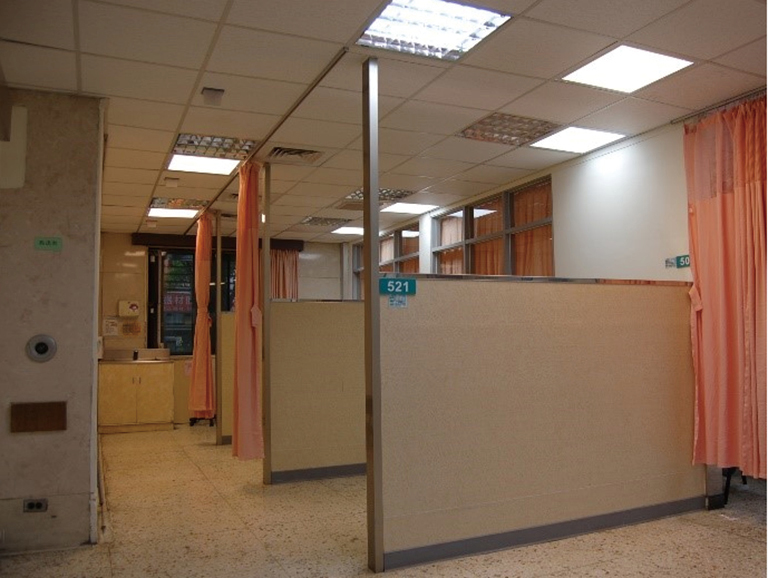 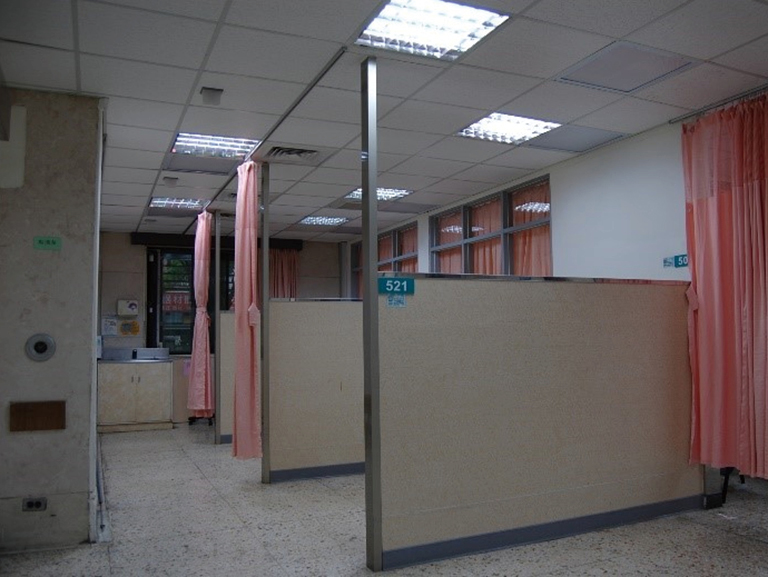 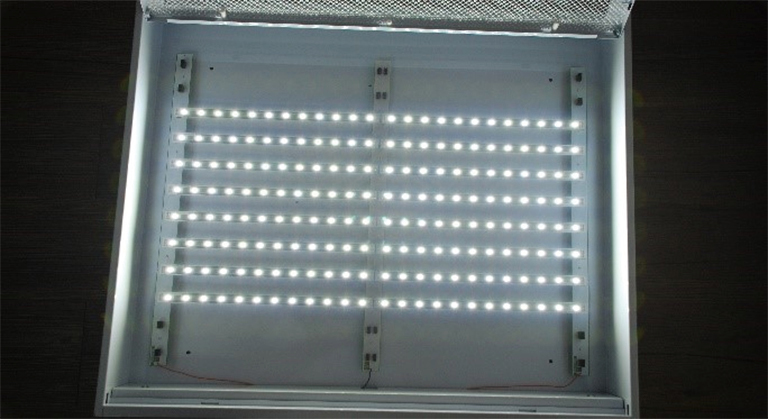 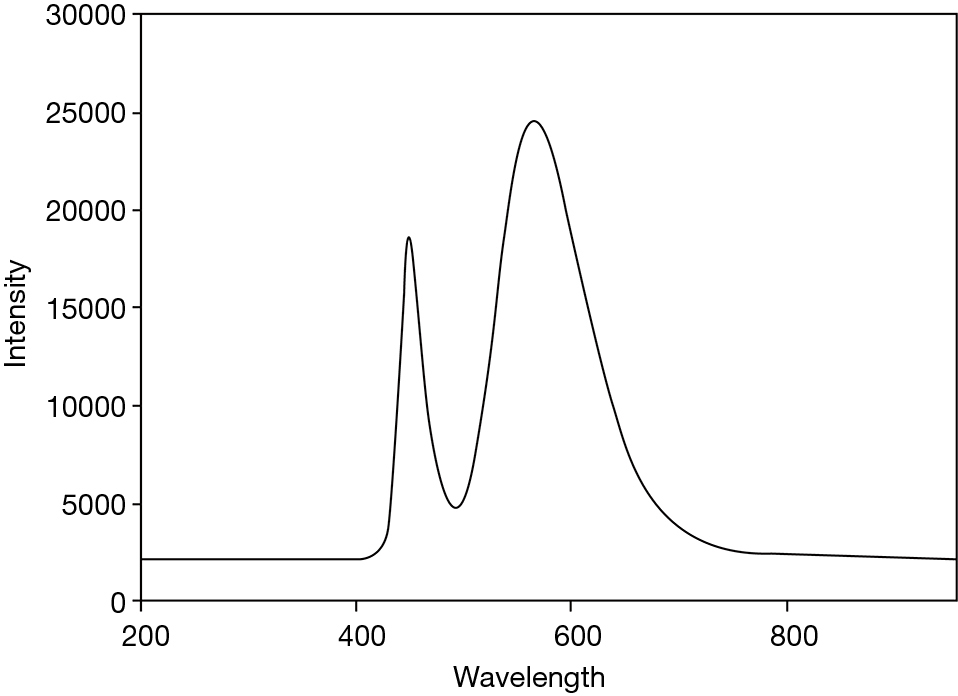 Among the 200 randomly selected patients, the number of males was 101 and the number of females was 99, accounting for 51% and 49% of the total number of subjects, respectively. Five patients were under 20 years of age, 27 patients were 21–30 years old, 34 patients were 31–40 years old, 23 patients were 41–50 years old, 21 patents were 51–60 years old, and 42 patients were 61–70 years old. Twenty-five patients were 71–80 years old, accounting for 13% of the total number of subjects, and 23 patients were over age 80, accounting for 12% of the total number of subjects (Table 1). 49 patients had fallen in the past because of dim light. They assume that LED lighting could effectively prevent future accidents. Power saving was identified as the most important concern overall on the patient questionnaire, as 78 patients ranked it first. The intensity of the lighting was the second most important concern overall. The patients’ behavior varied during the experiment. There were 127 patients that often watched TV, making it the most popular activity among the subjects, followed by reading and resting. One-hundred-forty-nine patients turned off the lights while sleeping, but those who left the LED lamps on had a better quality sleep. Most patients were satisfied with the lighting environment created by the LED lamps. According to the questionnaire results, 92.5% of patients preferred the LED lighting to (P<0.001) (Table 2). According to the 121 patients over the age of 50, the LEDs were better at providing sufficient lighting (116/121, P<0.001) and better aided the patients in identifying the things around them (121/121, P<0.01) (Table 3). The power measurement showed LED lighting as a substitute for T5 lamps would save around 20% on energy by measuring the disparity with kilowatt-hour meter. Therefore, LED lighting is not only energy-saving, but also provides a better experience for patients (Figure 5). 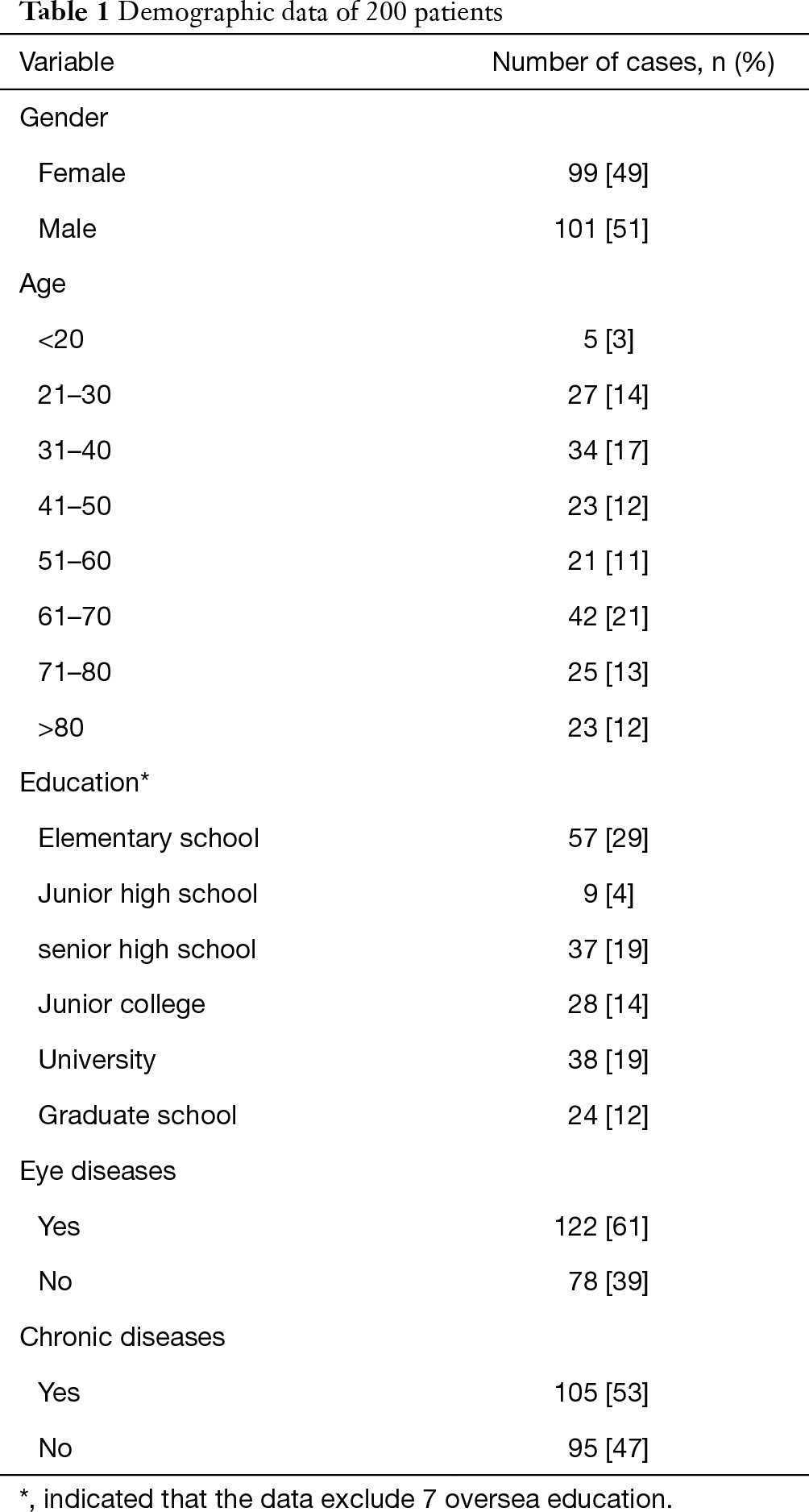 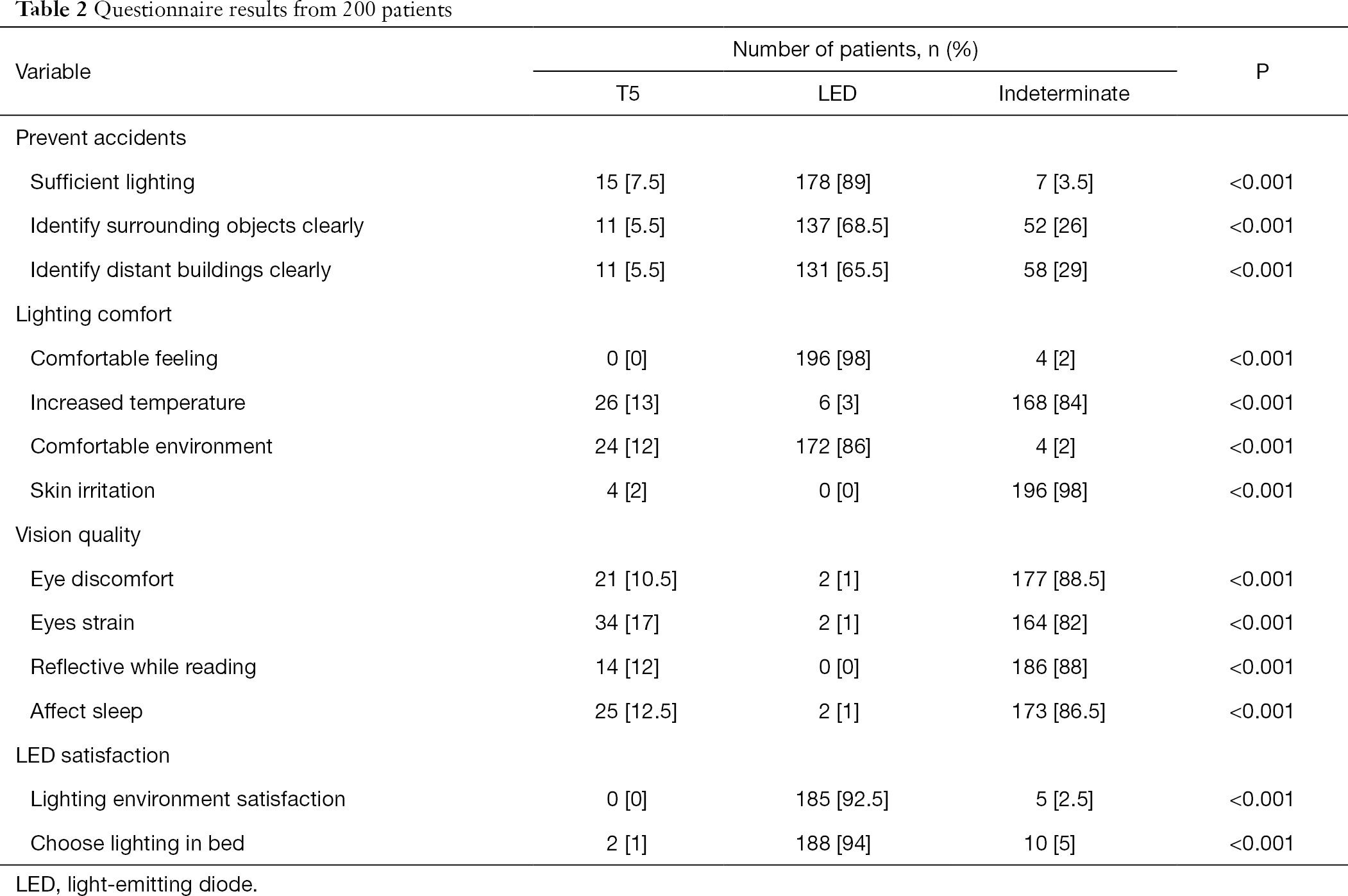 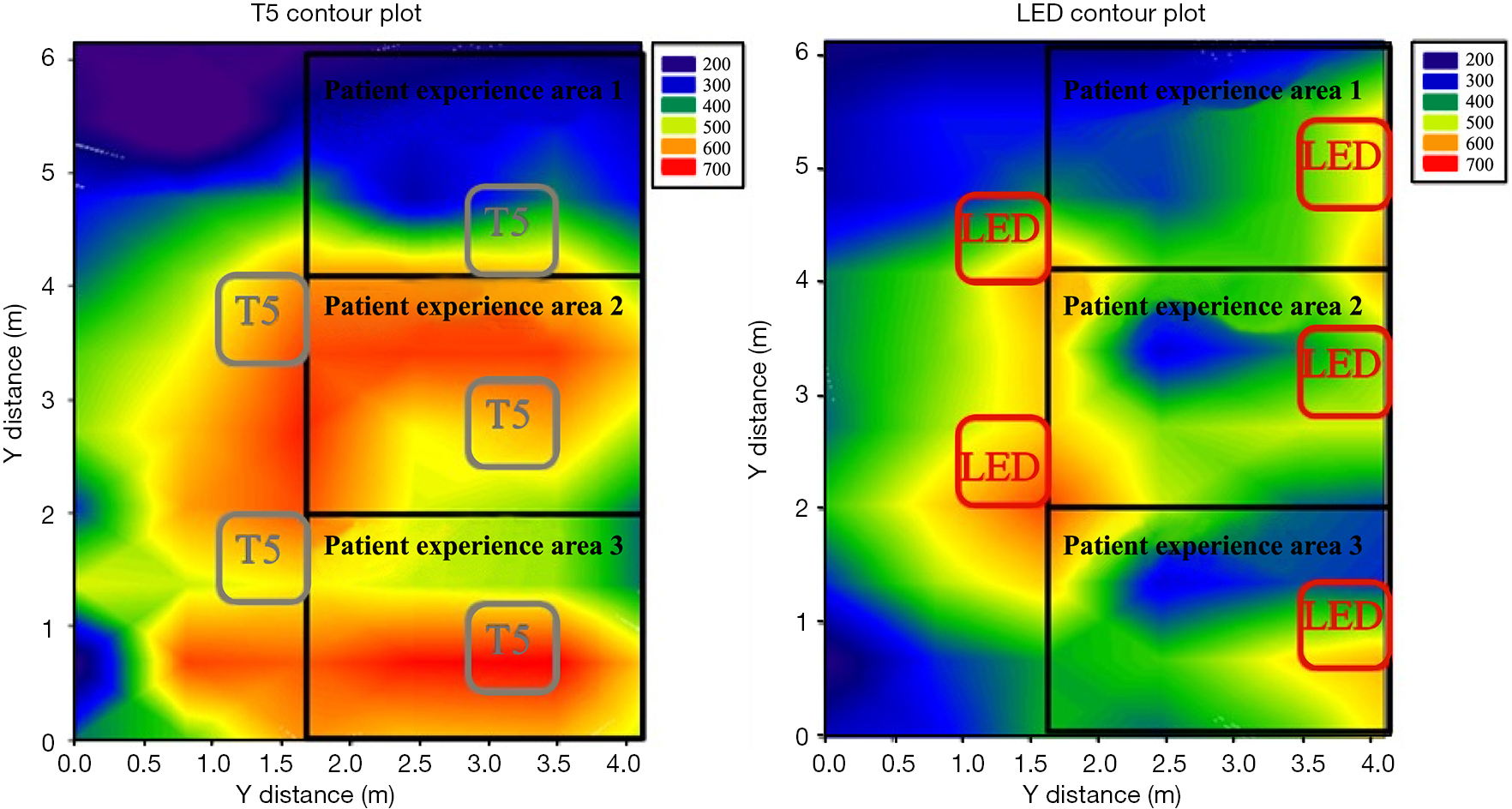 Figure 5 Comparison of the illumination between T5 and LED.

Traditional lighting sources, like fluorescent lamps, easily generate heat, which can cause headache. They can also affect the ability to correctly identify objects and color, which causes troubles while reading or working (13). The greatest drawback of the T5 daylight tubes is the serious glare condition and it increases the stimulation of the eyes (14,15). Exposing the naked eye to such an environment may cause soreness or discomfort and potentially lead to myopia in the long-term due to ciliary muscle fatigue (15). T5 lighting can cause tremendous harm to eyes. The most promising alternative light source is the solid-state LED, which has a theoretical maximum luminous efficiency as high as 289 Lm/W (16). According to previous laboratory data, the luminous efficiency of LEDs reached up to 249 Lm/W (measured at current 20 mA) (17), surpassing almost every type of existing traditional light source. LED lighting is therefore expected to have more breakthrough developments in future commercial applications (18).

Light pollution is a prevalent and harmful result of poor light sources. LEDs could be used to lessen the harmful effects of light pollution. The Japanese believe the use of artificial light inhibits the creation of a good luminous environment and creates adverse effects from light passing (Japanese Ministry of Environment, 1998) (19). In addition, the International Commission on Illumination (CIE) defines light pollution as the volume of astigmatism, the direction of trespassing, or the spectrum that causes disgust, discomfort, distraction, or decreased visual ability (CIE, 2003) (20). Taiwan defines light pollution as a disturbance or excessive amount of light radiation (including visible light, ultraviolet and infrared light radiation) that imposes adverse effects on human health and the human living environment (21).

The harmful effects that light pollution could potentially have on human health range from a minor biological clock disorder to serious mental illnesses, such as neurasthenia. CIE president Van Bommel mentioned that light can adjust and suppress human physiological processes (22). The Jasser et al. study in 2006 pointed out that light at night will inhibit the production of melatonin in human blood and increase the risk of cancer (23). Also in 2004, Narisada stated that light will inhibit the growth of human melatonin and that women are especially sensitive to this effect (24). Therefore, women workers who turn night into day have a 50% higher chance of getting cancer compared to someone who does not leave the lights on (25). In addition, excessive light can cause the reproductive disorder, increasing the risk of breast cancer and colorectal cancer (25,26). As the elderly mostly stay indoors, the intensity of indoor lighting greatly impacts their lives. The Japanese studied the impact of the environment on melatonin levels in the elderly and indicated that excessive strong lighting led to lower melatonin, which further caused insomnia, poor mood and even melancholy (27). However, research in the United States also showed that blue light can protect eyes and slow down their degeneration. Blue light can also enhance the quality of sleep and improve emotions (28).

Eyes are constantly exposed to different types of lighting. People often overlook their eye discomfort, which can develop into eye injuries. The color of the light can change the psychological feelings of people in the environment. Inappropriate ambient color may easily make people feel fatigue and discomfort (17).

The LED has characteristics that can improve the light of a space and reduce eye discomfort in the elderly. Traditional lighting sources can only improve an area’s lighting by making adjustments to the configuration and this has limited effects on the comfort of lighting in a space. The LED lamp is arranged in a low-power array and can be adjusted to emit different light types to reduce the glare effect and prevent reading problems.

According to the power measurement results, approximately 20% less power can be used by changing T5 tubes to LED lamps. This calculation also indicated that the return period for the energy-saving effect is about four years. There is a high potential for growth in LED production as LED lighting should rise in popularity and then the price will fall in the future (29). However, the performance of LED lighting in terms of the distribution of illumination is still below the T5 standard (30). The illumination uniformity of LEDs is better, though (31). This uniformity allows the elderly to properly identify their surroundings when walking and eliminates visual blind spots that cause accidents or falls (32). A questionnaire analysis revealed that among the 200 respondents, LEDs were significantly preferred in terms of preventing accidents, lighting comfort, visual quality and satisfaction. The literature review pointed out that the lighting requirement for people over 50 years old was twice as high as for those under 40 years old. In light of this, we also questioned 121 patients over the age of 50 about their satisfaction with LED lighting and found that they agreed that LEDs provide more adequate light and lighting comfort.

In summary, our research indicates that applying LED lighting in medical institutions to better the elderly’s lighting environment is very well accepted. This study found that many average illumination problems can be improved through a smart control system and can help prevent the elderly from walking in an environment that is too dark. Using LEDs also led to a better quality of sleep. Lighting sources have a large impact on the vision of people who spend a lot of time indoors. After replacing traditional lights with LED lights, the lighting environment is better and offers more protection for the eyes.

The authors acknowledge the assistant of Prof. Jung-Tang Huang of National Taipei University of Technology, who contributed to data collection.